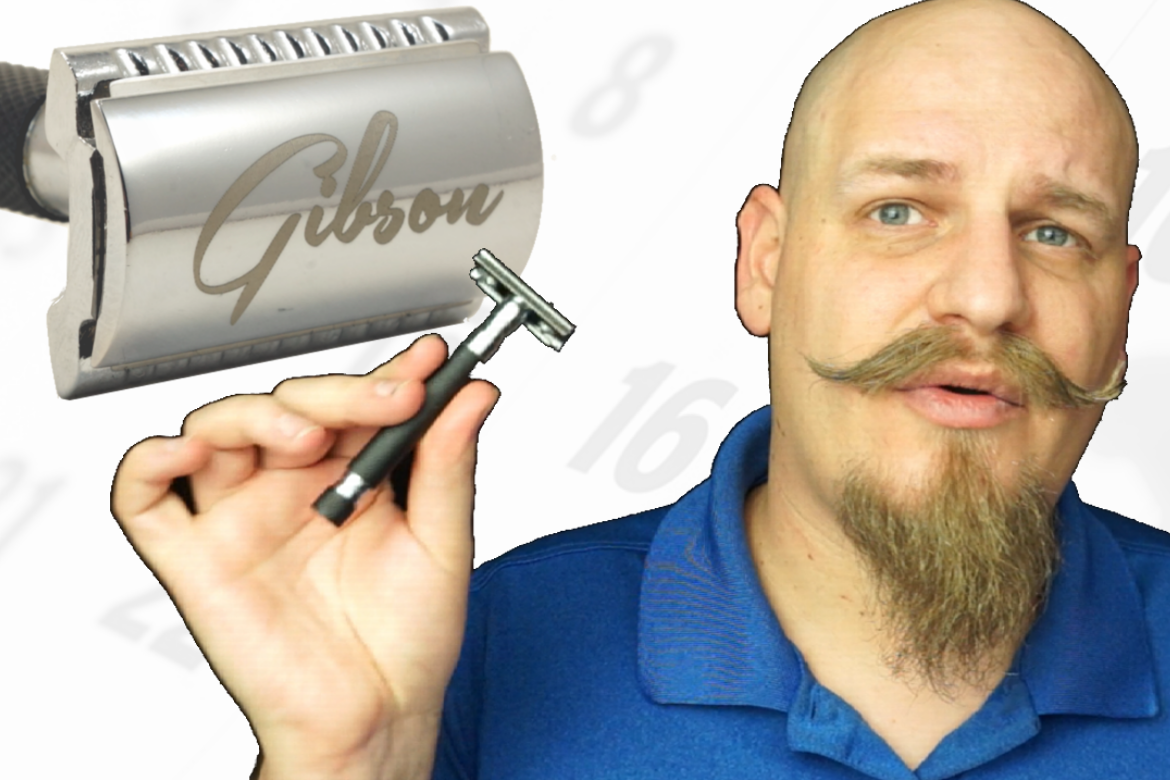 When I get ready to record a review I have things that I do, like making sure my audio recorder has enough battery, set up my lighting and camera settings and I do a bit of research on the product mainly just to get all the details and prices right for you guys. well, I have to say this one kinda brought me down a rabbit hole but before I tell you about that let’s take a look at the product its self. But first I want to let you know you cant purchase this razor any more, none the less it’s a good review with an intriguing story.

I liked how this came. It was in a mat black cardboard box with a glossy Gibson Logo on the lid. In white, on the sides, it has a picture of a de razor a mustache and also a shave brush.  Once you take the top lid off your greeted by a nice paper with a thank you that explains they are a small family owned business. This paper also has their contact info on it. under that is another paper with the instructions to replace or add a blade to the razor.  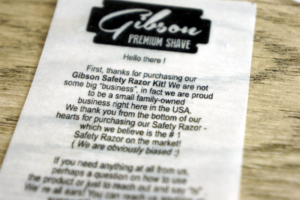 Under the papers, you find the razor blade box that is wrapped in labeled cardboard to match branding.  This is tucked nicely into foam packaging with a velvety fabric on top. once you remove the Blades you get your first look at the razor.

as you may be able to tell I enjoyed the unboxing experience of this product as it was simple but still had nice details.

The blades are a brand I had not heard of before called Treat. They are made in Pakistan. Evidently, they make several blades but the ones that were sent with the razor I got was the Treet Platinum. I have to say that they are nothing too impressive but they aren’t bad either. They did there job. I did end up using different blades after the first went dull.

My first impressions of this razor where good ones. I noticed the weight it had as soon as I got it out of the box. The razor is well balanced as well. This is a three piece razor. As for the looks, it has there name on the razor head itself which looks good and didn’t wear off in my usage period. The razor is made out of stainless steel with a zink head and then chrome plated. The handle has a nice textured area to it that help you keep a decent grip on the razor during a shave. these textured parts are sprayed black. unfortunately, by the end of the usage period, the black paint was chipping off the very end of the razor. I’m guessing that it didn’t have a correct try temperature or just was unable to properly attach itself to the chrome plating.

I was not impressed with the Treet blades they seemed to go dull faster than others and didn’t seem to be as sharp. Because of those issues, I switched to another brand that I had on hand fairly quickly into my trial of this product.  Besides the blades, I enjoyed using this razor as it was weighted nicely and was easy to find the angle I needed to get for a good close shave. The razor blade sides do not stick out from the razor head too far so I had no scratching when going around my ears due to them. 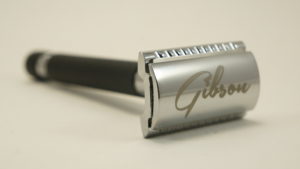 As I stated at the beginning of this review when doing the research for this razor I ended up going down a bit of a rabbit hole.  It all started when I noticed that the pictures on Amazon of the razor did not have their logo on the head of the razor I found that kinda odd but didn’t think too much into it, That is until I started to look at there website.  The website is well put together looks professional and states that “Gibson Shaving has dedicated 10% of all profits and partnered with organizations that are determined to help those who truly need it most.” and “If we can be of service, do not hesitate to contact me personally,  I personally reply to all emails and love to hear from our customers. Regards, Brett Gibson, Founder of Gibson Shaving Co. All Looks good and dandy but I kept digging anyway. On the site, It also has an OUR BRANDS area one is sports and outdoors company one is a beauty brand and one is a home and kitchen goods brand. These brands along with Gibson are all under Genius Flip Inc. that is “a consumer products company that develops successful consumer products”.

I have nothing against people diversifying so I decided to click the links and check out their other products.  The first one I clicked on is just a welcome to a page with no Info or products the second could not be reached and so that left the sports and outdoors site. This site actually brought something up with products and such. once again it looked well put together. My issue with this site is that everything on it looks to be rebranded products mostly for the beach.  That made me a bit concerned, not that it’s for beach products but that its rebranded products. Got me wondering if the razor was a rebrand as well. Being as to how the website says it’s designed by them that could be a HUGE issue in my books. I decided to email Brett about it a week before I recorded the review. I mean hey, after all, he “personally reply to all emails” well according to his site anyway.

The gist of my email was me explaining who I was and that I had bought one of his razors and that I noticed his other site had rebranded products and that I was wondering if he was still making products or if it had been rebranded and outsourced (realized later that it was all made in Pakistan). After getting the email returned via mailer-daemon, I dug even deeper looking for the social sites for his brands and looking for Bret himself.  What I found was odd. anything I could find was all from 2016 including his LinkedIn, what I did find wasn’t much as all. So I emailed all his emails that I could find, messaged him on his brand pages, with no responses. to be honest I didn’t even really find much on him or his companies before that time period. I did find that there was a Us address connected to Gibson. I have noticed that the Gibson site has slowly been having products being marked as sold out or heavily discounted. This leads me to think that they are closing down and no longer going to be selling products.

I’m not going to lie I have probably put WAY to much time into this then I should have however I tend to like a good mystery and every mystery ends with theories and well I have three of them.

My first theory is that Gibson was a nice little company that ran into some problems when actual marketing and when approached by a company to buy them out and do all the marketing they excepted and their relationship fell apart and it all failed.  however, that one has a few holes in it and that would be to simple. You see Brett’s name is on all the brands as the owner as well as Geniusflip so that theory kinda falls apart right there.

My second theory is that Bret outsourced Gibson as many shaving companies do and then decided to start the other brands as well and got overwhelmed and failed at all of them. or maybe and I hope this isn’t the case but due to the abrupt stopping of all social media and info at around the same time something bad happened to Brett and family has been taking care of finishing out the stock that he had left.

My last theory is that Brett never existed or was just a face for a company and that the Gibson along with the others was a foreign company trying to find loopholes to sell in the US and trying to make it look like they where a family owned and operated to try and sell a more rebranded product.

Whatever the Truth is the fact remains that you can no longer get the Gibson razor at least for the time being and I don’t see that changing. If there is ever an update to this I will be sure to let you all know the outcome. I still recorded a review of this product because after all I put in a lot of time into research and test time and figured you all deserved to know what happened.  You can watch that review below.